The Meaning Behind "Touch" 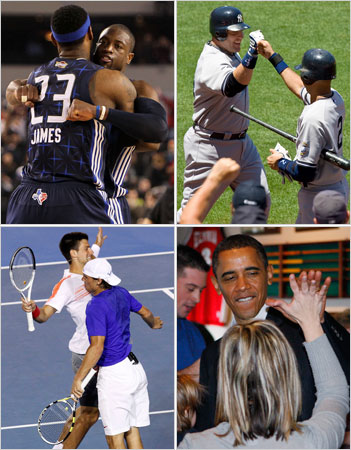 Science is giving more attention to our earliest form of communication - touch.

1) Studies have found that students who received a supportive touch on the back/arm from a teacher were nearly twice as likely to volunteer in class as those who did not. 2) A doctor's sympathetic touch makes one think the visit lasted twice as long VS those who were untouched. 3) A massage from a loved one eases pain, depression and strengthen a relationship. 4) Volunteers communicated eight distinct emotions merely by touching a blindfolded stranger. 5) A study of the high-5's and chest bumps in an NBA season revealed that, with a few exceptions, good teams (and oftentimes players) were touchier than bad ones (most touchy: Celtics and Lakers; least touchy: Kings and Bobcats).

A warm touch seems to release oxytocin, a hormone that helps create a sensation of trust and reduces stress hormone cortisol levels. In doing so the prefrontal area, which affects emotion, bears less of a burden and the body "chips in" to help in the task at hand. Psychologists think man builds relationships to distribute problem solving across brains. We're wired to share the processing load, and touch provides this supportive signal.
Posted by MP at 7:10 PM