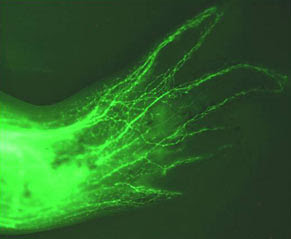 Salamanders have the amazing ability to regenerate a lost limb. Regeneration was assumed to occur because wound site cells would revert to 'pluripotent stem cell' status — allowing them to develop into many cell types and recreate the lost appendage — something adult human cells cannot do.

Nature recently published a study noting that salamanders' cells retain cell memory - that is they do not regrow from scratch. Rather than re-engineering human cells, it seems that the challenge is of coordinating already existing cells (like the salamander does) to reboot and regenerate. While a lot of work remains, the researchers now believe human limb regeneration may be an easier task than previously thought.
Posted by MP at 9:48 AM